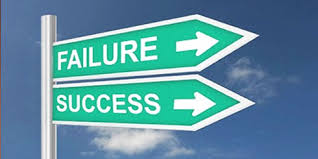 Today I came across a situation where I had to get back to my past and think about how what I used to perceive as my ‘failures’ have actually been a stepping stone to my success. I happened to share this thought with a good friend and a well- wisher. Her response shocked me… “don’t be too open about your failures, people won’t respect you!” she said.  Well personally I feel, there is no success without failure and only when one has faced a failure they know the value of success and also the true meaning of it. Failure need not be in terms of academic ranks or scores but it can be in any aspect of life, such as: the way one sees life, the way one responds to failure and success, maintaining or responding to relationships etc.

Seeing failure as something offensive and hiding it to only show the success means we have failed in recognizing the real path to where we are, was these materialistic failures that we have faced.

Coming back from where I started this article, I was thinking about my 12th standard results. I had taken science (PCMB) in PUC. Physics, chemistry and mathematics were never my cup of tea and around the same time I had a ligament tear in my ankle and hence I just reached the ‘passing marks’ in these three subjects and also could not get through with a good CET score. I thought I had “failed” as an ideal Indian student by not going into engineering. That was actually my first step towards success. That was my first step into the field I really enjoy and what I am made for. I took up psychology and started proving myself, scoring distinction and now I am in a job where I am not only doing well and earning a good name but also enjoying every bit of what I’m doing. 😊

Thinking of this incident, I remember reading about a concept called growth mind-set by Carol Dweck, where she talks about how failure can be seen as an opportunity to learn and evolve towards success. She spreads the idea of not labeling poor performance as ‘Fail’ as the word has a wrong impression in the society. ‘Failure’ makes people think that it’s the end of their journey to success and hence she calls poor performance as ‘not yet’. In this case the students get confidence that they have ‘not yet passed the test’ but they can once they try again. The performance and results teach them and make them realize that the way they studied and the effort they put was not enough or did not suit their style of learning and hence will try out better and more effective way to reach their goals and also aim at better goals too.

The taboo against ‘failure’ in the society should be changed and it can be changed by positivity and positive outlook towards failure. Each one of us can contribute to this by encouraging a young mind to keep trying. Be open about how much you had to work hard and all the failure you have faced (or thought you faced) and how at this point no body even bothers about that phase of yours. At the end of the day what matters is where one ends up, and if one is really satisfied and happy in the professions they are in and find passion in anything they are doing.

One thing one want to conclude with is, there is no accurate measurement for success and failure in life. Scores and marks are measurements to assess the learning of the students to decide If they will be able to handle the next level of learning and has nothing to do with their worthiness, intelligence or success. Failure and success are only perceptions. Like how I had once perceived (like any Indian student) that success only meant to end up as an engineer. As I matured mentally and emotionally my perception changed and I realize I am a successful, independent individual.

As APJ Abdul Kalam quotes “If you fail, never give up because F.A.I.L. means “first Attempt In Learning” and “If you get No as an answer, remember N.O. means ‘Next Opportunity'”

View all posts by Inspiring Learners

4 thoughts on “Is Failure always measured with Success?”